You are here: London Online > Kings and Queens > Henry VII 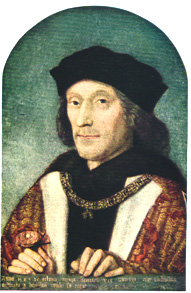 Son of Edmund, eldest son of Owen Tudor, by Katharine, widow of Henry V. His mother, Margaret Beaufort, was great-granddaughter of John of Gaunt. Born 1456. Came to the throne, as aforesaid, on the field of Bosworth. Crowned at Westminster, October 30th, 1485.

Married Elizabeth, daughter of Edward IV.; and so were blended in one the white and red roses of York and Lancaster, henceforth to be the badge of Tudor regality. The inheritance of the Crown was "to be, rest, and abide in King Henry VII. and his heirs." Thus Parliament declared, November 7th, 1485; and it was so.

But this prince of both Houses was to be no more restful in his realm than his predecessors. Within two years of his election, Lambert Simnel, a boy of eighteen, son of an Oxford tradesman, was persuaded to lend himself to the imposture of being Edward, Earl of Warwick, said to have escaped from the Tower, who was the son of George, Duke of Clarence, of the royal line of Edward III.

That insurrection put down, another pretender arose - Perkin Warbeck - who was also in due order of events overthrown. Warwick and Warbeck were both prisoners in the Tower, and having (as was said) tired and vexed the King with plans and plots, were sent to death. The execution of the Earl is held to have been "the one judicial murder" of King Henry VII's reign.

Parsimony and avarice are considered to have been his chief failings. As was usual with many of England's earlier kings, Henry invaded France. Eventually he received large sums of money from the French king for abandoning the war.

"He made the very insurrections and conspiracies against him not only pay for their suppression, but become actual sources of revenue." The chief aim of the King was not to be compelled to appeal to Parliament for money. He worked his way by the revival of "dormant claims of the Crown, by the exaction of fines for the breach of forgotten tenures, and by a host of petty extortions" - not for the greedy desire of riches, he said, or hunger of money; but "to bring low and abate the high stomachs of those of his subjects who had too much or enough money and to spare."

The more ostentatious a nobleman (among others) in his style of living, the likelier he to attract Henry's attention; all illegal, hut not without profitable warnings and lessons. This Henry Tudor was One of the most skilful and far-sighted of rulers.