You are here: London Online > Kings and Queens > Mary I 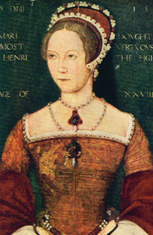 Her name has been passed down through the intervening centuries as "bloody Queen Mary"; not without warranty for that odious appellation, since "almost two hundred persons" perished in the flames for their religious convictions during the four brief years of her reign-" a number at the contemplation of which the mind is struck with horror." Thus Lingard the historian (Catholic).

Other authoritjes say, "nearly three hundred." It does not matter which; the epithet is registered in History, and can never be erased. None can write of Mary I. without sickening at the thought of the blood shed by her to "purge Heresy"; because in her reign one person thought differently from another in matters of religious opinion.

"We confess we pity 'Bloody Mary,'", wrote Leigh Hunt, "almost as much as any unfortunate sovereign on record. She caused horrible and odious suffering; but she also suffered horribly her-self, and became odious where she would fain have been loved. She had a bigoted education, and a complexional melancholy; was stunted in person, plain in face, with impressive, but gloomy, eyes; a wife with affections unrequited; and a persecuting, unpopular, but conscientious sovereign. She derived little pleasure apparently from having her way, even in religious matters; but acted as she did out of a narrow sense of duty; and she proved her honesty, however perverted, by a perpetual uneasiness and anxiety. When did a charitable set of opinions ever inflict upon honest natures those miseries of an intolerant one?"

The greatest of the Martyrs of her reign in point of dignity and learning were Cranmer, Arch-bishop (of Canterbury), and Bishops Latimer, Ridley, Hooper and Ferrar; their ecclesiastical enemy the brutal Bonner, Bishop of London. "Play time man, Master Ridley; we shall this day light such a candle, by God's grace, in England, as I trust shall never be put out." So spoke the great Reformation preacher, Latimer, to his fellow-martyr at the stake.

The rebellion of Sir Thomas Wyatt and the "men of Kent" was an event of Mary's reign. Had it proved successful, she might never have earned that repellent prefix to her queenly title. She was a religious bigot of the most intense kind, who was miserable herself, and caused widespread misery and suffering to others.

Her death at the age of forty-three was hailed by the nation with joy-an obstinate, bigoted, cruel, revengeful, and tyrannous queen.