You are here: London Online > Kings and Queens > Richard II 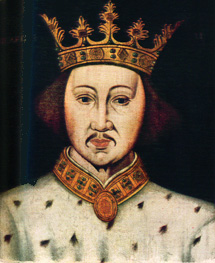 Son of the Black Prince, eldest son of Edward III., that model of chivalry, famous in English annals as the hero of Crecy, who fought also at Poitiers and elsewhere, who lived to the age of forty-six, dying then of consumption, and whose dust now lies in Canterbury Cathedral.

To him Richard II. succeeded in his eleventh year. Crowned at Westminster July 16th; at the dawn of a period of great political and social strife: "the Great Schism" in the Church; the "Peasants' Revolt"; warfare and dangers broadcast at home and abroad.

A committee of Regency, of whom his uncle was head, held The young King in bonds for some years. Those the King eventually cast off (not without banishments and the aid of the headsman's axe) in his twenty-fourth year. Then he thanked the Lords for their past services-" I have been longer under guardianship than any ward in my realm "-and told them that he needed those services no longer.

The brilliant abilities which Richard II. shared in common with others of the House of Plantagenet, "were marred by a fitful inconstancy, an insane pride, and a craving for absolute power." "Not born to sue, but to command," in the words of Shakespeare. "Although a man be wise himself, yet is the wisdom more of twelve," is an apter quotation from the poet Gower, of Richard's own time.

He preferred "young friends," we read, to "the advice of his older nobles." Were he to be condemned for that alone, nine out of ten lesser folk would stand condemned for a similar failing. But he was despotic. He heavily taxed his people. He was fond of late hours, too, and much devoted to "voluptuous luxury." He was also spendthrift.

"Yet were there many laudable features in his character: he loved religion and the clergy; he encouraged architecture; he built Westminster almost entirely [witness Westminster Hall today]; the Carthusian monastery near Coventry, and the Dominican at Langley," which in vain five centuries later we seek still standing; not the case with that noble "bed-chamber" originally projected by the Red King.

There it was King Richard did willingly "resign to my cousin Henry of Lancaster" royalty, lordship, sceptre, crown, and heritage; and did entreat of him, in the presence of the Lords of the Council and other of the nobility, to accept of the symbols of royalty. In 1399, on the Festival of St. Michael, thus did King Richard II. A few months later he was dead, whether murdered in Pomfret or elsewhere matters little, and now lies in Westminster Abbey.