You are here: London Online > Kings and Queens > William III and Mary II

About William III and Mary II 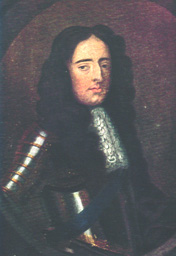 National discontent with the policy and conduct of James II. culminated in a national rising in support of the landing of William of Orange, who had been invited over by leading English statesmen to accept the crown vacated by James's flight.

The Prince landed at Torbay, with an army of thirteen-thousand men, November 5th, 1688, and, marching on Exeter, was hailed with joyous enthusiasm by its citizens, other cities and towns throughout the kingdom following the example of the West of England in hailing the revolt with delight. Everywhere in England it was triumphant.

In due order of events, the Prince's army reached Salisbury, and presently entered London, and the Revolution of 1688 became an accomplished fact; the expression of the national feeling being in favour of a "Free Parliament and the Protestant Religion."

After debate it was agreed by Parliament that William and Mary should be acknowledged as joint-sovereigns, but that the actual administration should be left with William alone. The memorable "Declaration of Rights" was drawn up, and on February 13th, 1689, presented to William and Mary in the Banqueting-house, Whitehall.

In full faith that its principles would be accepted and maintained by the Prince and Princess of Orange, the Crown was tendered to them. They were declared King and Queen, and crowned in Westminster Abbey April 11th following.

Those who would read the character of William III. at length should turn to Macaulay's History: a brave and successful commander, an able and high-minded statesman, and a noble man; Mary, his wife, a good and sensible woman, lively and affable, self-sacrificing, devoted to her husband, who was also deeply attached to her. A small gold locket containing "a lock of the hair of Mary," was found nearest his heart when he died.

He was tried as few English kings have been tried; frequently plotted against by Jacobites, and more than once threatened with assassination; but remained the same sincere, energetic, and brave King to the last; not altogether popular, but by sheer force of character gaining men's admiration and esteem.

The famous siege and relief of Londonderry, and the battle of the Boyne, were of King William's reign; but much more famous than these is the fact that all claim of the King's "Divine Right," or of his "hereditary right, independent of the law," was formally put an end to by the crowning at Westminster of William and Mary.