You are here: London Online > Kings and Queens > Charles I 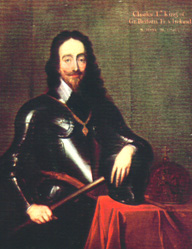 Only surviving son of James I. Born 1600. The year of his accession married Henrietta, daughter of Henry IV. of France. Crowned at Westminster, February 2nd, 1626, and at Edinburgh, 1633.

The court of Charles was decorum and virtue itself, in comparison with that in which he had been reared. Drunkenness disappeared, and there were no scandalous favourites such as Carr, and he on whose neck James loved to loll; though George Villiers, the first Duke of Buckingham, retained his ascendancy as the friend and assistant of Charles as king.

Of a much less jovial temperament was he than his father, and of more virtue; though there was still (we read) a good deal of "private licence" at Whitehall. "Oaths!" exclaimed Charles II., "Oaths! Why, your Martyr was a greater swearer than I am."

It has been questioned also, whether, in other respects, Charles I.'s private conduct was so "immaculate" as the solemnity of his latter years and his unhappy fate have led people to conclude. Whose private conduct, prince or peasant, in early life is immaculate? Why kings more than their subjects?

Charles I. might, unpolitically, have been less unpopular, but for his unsympathetic nature, his stiffness and reserve, a certain "frigid haughtiness," and his profound belief in his own wisdom, which could gain little or nothing from being brought into touch with the opinions of other men. He had been schooled, politically speaking, to look upon government as the "Divine right" of the King, independent of the will of the governed-a lesson taught him by his father. But with all his faults he was "a diligent and earnest reader of books." Not a few faults are atoned by that excellent quality. Moreover, he was a connoisseur and patron of art.

Adversity rather than prosperity shows Charles I. in the more favourable light. The great events of his reign are familiar to everyone: his attempt to seize the five members of the House of Commons (1641-2); his standard raised at Nottingham the same year, the beginning of the Civil War; his traffic with the Scots and betrayal (1646); his seizure by Colonel Joyce at Holmby (1647); his retreat to the Isle of Wight, and confinement in Hurst Castle (1648); his removal to Windsor, and then to St. James's Palace; and, finally, his trial in Westminster Hall, and execution before Whitehall, January 30th (1649), aged forty-nine. He lies buried in St. George's Chapel, Windsor.