You are here: London Online > Kings and Queens > Henry III 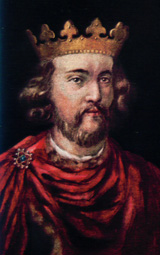 Son of John. Succeeded to the throne at the age of nine. Declared himself of full age in 1227; meanwhile was under guardianship. Crowned at Gloucester, October 28th, 1216; received homage from Alexander of Scotland at Northampton, 1218; crowned again at Westminster, 1219. "The weakest in mental capacity of all the Plantagenets."

In his case, a multitude of able counsellors brought him little kingly wisdom, for none was so constantly untrue to himself. A prince of rare fickleness and falseness, in whom "conscience appeared to be dead."

The most of King Henry III.'s long reign was "an oscillation between revolutionary governments and royal misrule," which state of things gave rise to the grave problem of how to weaken what rule he maintained without producing anarchy within his kingdom. Happily, that problem was solved by the labours and wisdom of able men, not, however, without much bloodshed; but at the end of this king's reign, England became for the first time in its history "nationally one," as today.

"A sixth of the royal revenue was wasted in pensions to foreign favourites. The debts of the Crown mounted to four times its annual income. Henry was forced to appeal to the Great Council of the realm, and aid was granted on condition that the King confirmed the Charter." There being no other alternative, Henry assented; and thus was established the well-known constitutional principle, made familiar to many a king who succeeded Henry III., that redress of wrongs precedes the granting of supplies to the Crown.

For many an important reform which proved of infinite value to English freedom in later times, the country was indebted to Stephen Langton, Archbishop of Canterbury, who died (1228) the year after Henry declared himself of age.

The greatest grievance suffered from Henry III. was his preference for foreigners over his own countrymen, which was greatly resented. "The most lovely and lovable thing in Christendom," the existing Abbey-church of Westminster, which he began to build, and where he lies buried, that and the earliest inception of the House of Commons over the way, serve to remind us of his reign.