You are here: London Online > Kings and Queens > Henry II 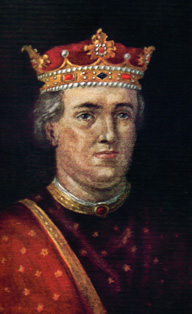 First of the Plantagenets. Grandson of Henry I., by the marriage of Matilda, that king's daughter, with Geoffrey, Count of Anjou and Maine. Born 1133. Some chroniclers say three times crowned: at London, December 19th, 1154; four years later at Lincoln; and the year following at Worcester; a king who could not only govern, but who determined to make his authority felt throughout the kingdom.

Of the like strength of will as his ancestors of the Norman line; of ceaseless energy "he never sits down; he is always on his legs from morning till night," is recorded of him: a learned king likewise; of clear perception of what were wise and what unwise to be done in given circumstances; a good judge of men's ability, with the power of turning that ability to account in affairs of government.

"Great knowledge," had he, "of the ideas of others, and of the results of ideas and systems in past times." In brief, King to the core was this second Henry. His reign "initiated the rule of law." The fabric of our judicial system, including the true origin of trial by jury as now practised, dates from "the Assize of Clarendon" (1166).

Henry's great controversy with the papal power is well known, and of the foul murder of Archbishop Thomas a Becket before the altar in Canterbury Cathedral; of the imprisonment of Queen Eleanor; the tale of "Fair Rosamond," the king's concubine; of his eldest son Henry being crowned king of England during the father's reign; of how he did unkingly penance at Becket's tomb; took the King of Scotland prisoner, and obliged him to give up the independency of his crown; and of his strained relations with his sons.

The rebellion of one of his sons, the successive deaths of two others, and a conspiracy in which his youngest and best-loved joined, brought the father's life with sorrow to the grave.

He is said to have "died with grief at the altar cursing his sons " - one of the mock-pearls of history. "Let things go as they will," he said, lying down to die: much the same remark as the "vanity of vanities; all is vanity or vexation of spirit" of him who reigned King in Jerusalem. Henry II., at the age of fifty-eight, cared no more for himself or the world. He lies buried at Fontevrault, the greatest prince of his time, for wisdom, virtue, and abilities.