You are here: London Online > Kings and Queens > Edward VI 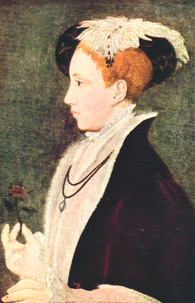 Son of Henry VIII. by Jane Seymour. Born 1537. Crowned at Westminster, February 20th, 1547, at the age of ten. Died at the age of sixteen. Was by his father's will placed under the guardianship of a Council of Regency, of whom the youthful Edward's uncle, Lord Hertford, after-wards Duke of Somerset, was the chief, subsequently assuming the title of Protector.

His period of office was marked by a struggle between adherents of the old religion (Catholic) and of the new (Protestant); the use of the Book of Common Prayer which, with slight alterations, is still that of the Church of England, and of the Missal and Breviary from whose contents it is mainly drawn; such, historically, were the points of religious conflict at the beginning of the reign of Edward VI., here noted because they occupied men's minds and provoked disorder and bloodshed throughout the kingdom during the most of his brief reign.

Edward VI.'s character partook of the obstinacy of his father's, which was formalised in the son by weak health, early ending in consumption. His faults assuredly did not lie on the side of an excess of feeling, as is shown by his indifference to the execution of both his uncles, the Protector and Lord Seymour, and in the cool way in which he notes the fact of their death in the journal which he kept. Had he lived, he might have turned out a respectable but not an admirable sovereign, nor one of an engaging character. In his case, whatever was, was right. His reign seems to have ended neither too early nor too late. "Whom the gods love die young." Let that be his all-sufficient epitaph.

He is best remembered by his grammar schools, of which he founded eighteen, the greatest of which is Christ's Hospital, for considerably over three centuries remaining in one place-Newgate Street, London, but now removed to Horsham.

St. Bartholomew's, St. Thomas's, Bridewell, and Bethlehem - the so-called "royal hospitals" - were of Edward's institution. He was not a little of a "bigot" religiously, pardonable enough in one who had but just "come to years of discretion" when he died. He was prone, we are told, to lecture others much older than himself on principles of theology.

He dictated to his sister Mary, a bigot herself, on the rules of her own conscience: "Although her good sweet King," said she, "hath more knowledge than any other of his years, yet it is not possible that he can be judge of these things." Edward VI. died at Greenwich, and lies in Westminster Abbey.