You are here: London Online > Kings and Queens > Edward I 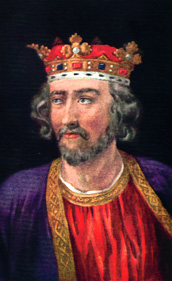 Eldest son of Henry III. Born 1239. Crowned, with his Queen, Eleanor of Castile, at Westminster, August 19th, 1274, two years after his accession, at which time he was absent in the Holy Land, and being there wounded, did not land in England till the month before his Coronation.

Wales first came under the dominion of the English kings in Edward I.'s reign. His second son, who, by the death of his eldest brother, became Edward II., born at Carnarvon, was created Prince of Wales, a title borne by the heir to the Crown of England ever since.

"No man was more acute in council, more fervid in eloquence, more self-possessed in danger, more cautious in prosperity, more firm in adversity," than this, the "greatest of the Plantagenets." Those whom he once loved he scarcely ever forsook; but he rarely admitted into his favour any that had excited his dislike. "His liberalities were magnificent." Thus the chroniclers.

Among minor matters of interest these may be added: King Edward I. loved not rich apparel, nor the wearing of his crown, holding it "absurd to suppose that he could be more estimable in fine, than in simple apparel." The Coronation Chair in Westminster Abbey was brought by him to England from the Abbey of Scone, in Scotland.

Finally, the name Charing Cross is a perpetual memorial of himself and of Queen Eleanor his much-loved wife. Those interested may see a copy of the first Eleanor Cross of the village of Charing of Plantagenet times, in the railway station yard most familiar to Londoners. Edward I. lies buried in Westminster Abbey. His favourite device, Pactum serva ("Keep troth"), is no unworthy epitaph of this politic, vigilant, and enterprising king.