You are here: London Online > Kings and Queens > William II 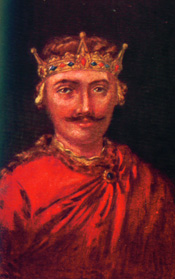 Third son of William the Conqueror; surnamed Rufus; born 1057; crowned at Westminster, September 27th, 1087. There was something of the same stamp of greatness in the son as in the father-magnanimity as was said-and the like kingly self-reliance. In energy and strength of will the two were well matched, though hardly so in moral grandeur; in that respect, the father was greater than the more violent, tyrannical, unkind, and ungenerous son.

Westminster Hall is a mere "bed-chamber" of the palace in comparison of what William the Red had intended to build. He was that king who was not to be delayed in meeting an enemy by a storm at sea. Why should winds and waves hinder? He had never heard of a King perishing by shipwreck. Sailors, truly, might drown; but a King-never! "Fealty I have never willed to do, nor do I will to do it now," the father had written to Pope Gregory VII. The Red King also quarrelled with the Church. Of the same type of men, father and son; stout of heart and strong of purpose; born rulers of men.

During nearly the whole of his reign Rufus had to contend for his life, as well as his throne, against incessant conspiracies of the Norman barons, and it was only by the aid of the Anglo-Danish population of England, and by carrying the war into the Norman home of his rebellious vassals, that he was able to maintain himself at all. But he did so, and not only crushed every rebellion at home, but made stronger his holding in France.

To his florid complexion and yellow hair he was indebted for his epithet of Rufus. He had a thorough hatred and contempt, we are told, "for all the human apparatus of religion," so that it was written of him by a contemporary chronicler, William of Malmesbury, that " he feared God but little- man not at all." At the age of forty-three he was killed by accident (as is supposed) while hunting in the New Forest, and lies buried at Winchester.