You are here: London Online > Kings and Queens > George III 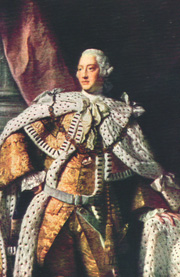 Fifteen children were the issue of the marriage. George III. reigned for fifty-nine years, the longest period of any sovereign of England, except Queen Victoria. During the latter years of his reign there was a Regency, owing to the King's mental derangement.

Some of the most momentous events in history occurred during George III.'s reign: the French Revolution; the Napoleonic wars; the Declaration of American Independence; the birth of England's Empire in the East; the Conquest of Canada; Captain Cook's voyages, and the discovery of Australia and New Zealand and their annexation by Great Britain; the Union with Ireland; the fall of Napoleon; the American War of 1812.

Nelson and Wellington stand foremost in the annals of George III.'s times, in leading its navy and army from victory to victory, culminating in those of Trafalgar and Waterloo.

Of the great events of George III.'s long reign, and of the great men - statesmen, orators, admirals, generals, lawyers, authors, men of science and the like - that belonged to it, it is not possible to refer to otherwise than merely incidentally. "I know that I can save the country," prophesied the great William Pitt, who died in 1778. And he did save it, and that, too, with the whole nation at his back.

A just king, a religious king, a king who stuck steadily to his work; of kindly nature and domesticated habits, essentially a "good man"; such, in brief, was George III.; but he was also obstinate, narrow-minded, prejudiced, and disposed to be autocratic.

In the long run he did most things his Ministers thought it wise should be done; but not without many vexatious delays and endless trouble. "In ten years he had reduced government to a shadow, and had turned loyalty at home into disaffection... He had a smaller mind than any English king before him, save James II."

But for all that he was popular with the people, who loved his simple life, and sympathised with his sorrows, which were not a few.