You are here: London Online > Kings and Queens > Henry IV 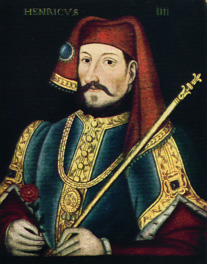 Son of John of Gaunt, Duke of Lancaster; grandson of Edward III. first king of the House of Lancaster. Born 1366. "Descended by right line of the blood coming from the good lord, King Henry III. and "through that right God of His grace" had given him, he claimed of Parliament the Throne.

Parliament assented - albeit his right of heirship has been deemed doubtful - and he was crowned at Westminster, October 13th, 1399, his Coronation commemorated to our day by the honourable Order of the Bath, which he is said originally to have instituted.

He came to the throne in middle life, having travelled far and wide in Europe, and in the East as far as Jerusalem. Much of his brief reign of fourteen years was spent in campaigns-against the Percys, the Scots, and the Welsh. He was of great activity of mind, as well as of body: "no mere statesman of the cabinet"; personally brave to the extent of rashness; well versed in the knightly and courtly accomplishments; and "with tact enough to catch the humours of the lower-orders"; albeit he governed his people more by terror than by affection.

During no period of England's earlier history were the powers of Parliament, from which he had derived no little support, "so frankly recognized"; and in his several wars none had been more helpful to him than his son, the Prince of Wales-the "Prince Hal "of Shakespeare, later to become Henry V. Young as he was, he took his place in his father's councils, as well as in his armies in the field. A bitter quarrel later broke out between the two, which lasted till the King's death of apoplexy at Westminster.

There is "no real evidence," we are told, to support the stories about the Boar's Head in East Cheap, and Falstaff and his merry companions; and that of Chief Justice Gascoigne is, alas mistrusted nowadays, along with an earlier familiar tale - that of Dick Whittington. The real pearls of history do not provide such pleasant reading as some of its mock-pearls. Henry IV lies buried in Canterbury Cathedral, a city which serves to remind us of the proximity of Gad's Hill, not to add the valour of the men in buckram.