You are here: London Online > Kings and Queens > Richard III 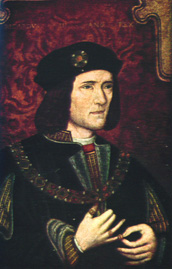 Younger brother of Edward IV. Born 1450. Made Protector of England, as aforesaid, 1483; elected King by his supporters, June 27th of that year; and crowned at Westminster the month following. His age, therefore, was thirty-three when he ascended the throne, which he held for two brief years, being killed at the battle of Bosworth in the struggle with the Earl of Richmond, Tudor-heir of the House of Lancaster.

The Duke of Buckingham's revolt in the first year of King Richard's reign had paved the way to that final issue of the enmity of many of the nobility towards him. Buckingham and Richmond joined hand with hand to dethrone Richard. Buckingham failed, and was beheaded; Richmond succeeded; and to the victor belonged the spoils-the Tudor succession to the crown of England.

Baynard's Castle, by St. Paul's, was the scene of that solemn farce recorded, in which Richard assumed the royal dignity at the invitation of Buckingham, and in obedience to the pretended wishes of the citizens-a scene, among others, pictorially represented on the ambulatory walls of London's Royal Exchange.

The murder of the princes proved the overflowing of the already full cup of Richard's iniquities. It roused indignation wherever known-that "crowning deed of blood." "He was close and secret, a deep dissembler, lowly of countenance, arrogant of heart, outwardly companionable when he inwardly hated, not letting to kiss whom he thought to kill, vindictive and cruel, not for evil always, but often for ambition and increase of his estate. Friend and foe were alike indifferent where his advantage grew; he spared no man's death whose life withstood his purpose." Thus Sir Thomas More, in his "Life of Richard III."

The best, perhaps, that has been recorded of him is that he met a soldier's death. He hewed his way on the field of Bosworth into the very presence of his rival. There he fell overpowered by the numbers of those who hated and feared him, eager to have the mastery, and along with it his life.

He had actually worn the crown in battle, "which was found as the struggle ended near a hawthorn bush, and placed on the head of the conqueror," amidst shouts of "King Henry!" So, in 1485, came the first of the Tudor line to the throne of England.