You are here: London Online > Kings and Queens > William IV 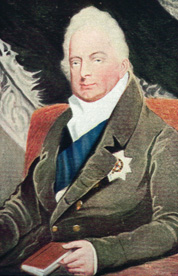 Third son of George III. Born 1765. Created Duke of Clarence, and served for eleven years in the Royal Navy; nine afloat on service in the Mediterranean, and North American and West Indian stations, as midshipman, lieutenant, and post-captain in command of a frigate.

Retired from active service with the rank of rear-admiral, and was later gazetted, in turn, vice and full admiral, and admiral of time fleet. Presided at the Admiralty for a while with the title of Lord High Admiral - the last who bore that title. Was associated with Nelson during part of his sea-service.

In 1818, married Adelaide, daughter of the Duke of Saxe-Coburg-Meiningen, by whom he had two daughters, both of whom died in infancy; consequently the succession to the Crown fell to the Princess Victoria, daughter of the Duchess of Kent, wife of Edward, Duke of Kent, the King's brother, who predeceased her.

King William IV., who came to the throne in 1830, at the age of sixty-five, was popular with all classes of his subjects; generally known among them as "the Sailor King"; a bluff-spoken, garrulous, kind-hearted man, who "exhibited oddities," distinguished himself by making long and somewhat absurd speeches, and by "a morbid official activity" whilst in the Navy.

Neither as prince nor king did he show any remarkable interest in political affairs; "he was reasonable and tractable, presided very decently at the Council, and looked like a respectable old admiral," as he was. So notes Greville in his gossiping pages.

He looked after old friends and companions; and, in short, was a kindly, good-natured king, whose early experiences, and by no means luxurious life aboard ship, had taught him many useful lessons, not less profitable to princes than lesser people.

The most important political event of William IV's reign was the passing of the Reform Bill (1831-2) by Earl Grey; a measure which had taken many years to convince Parliament was essential to the fair and adequate representation of all classes of the King's subjects in the House of Commons.

So great was the agitation produced by its rejection by the House of Lords, that it was finally allowed to pass, and became law; King William himself being favourable to the popular demand for such reform.