You are here: London Online > Kings and Queens > Edward III 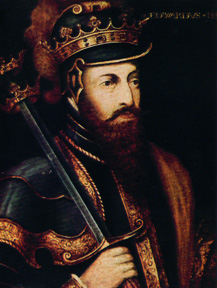 Eldest son of Edward II. Born at Windsor, 1312, succeeding his father at the age of fifteen. Crowned at Westminster, February 1st, 1327. During the first three years of his reign, the administrative power was practically in the hands of Earl Mortimer, the paramour of his mother, Isabella of France, Queen of Edward II. In due order of events Mortimer was hanged, and Isabella never again allowed to meddle in state affairs. Edward III. being, at the age of eighteen, his own master, became a constitutional ruler.

In his reign, the two Houses of Parliament became finally separated as now-Upper and Lower House; Lords and Commons. The former were successful in insisting that no member of their House should be tried, save by his peers. In the House of Commons were seated, side by side, knights of the shires and burgesses of the towns; gentlemen of the counties, allied to the nobles, with merchants and traders; men, in a word, of inferior social rank; thus giving firmer foothold to the rising English Middle-class. King Edward III. assigned to the Middle-class "an authority on national as well as special legislation."

"He had the wisdom to encourage all corporate representations of the Middle-class"- the merchants' and trades' Guilds, for example - "and to recognise in them a conservative, rather than a subversive, element of government." The birth of the energetic, stable, enterprising, and pros-perous Middle-class may be said to date from King Edward III.'s reign.

Many well-known and notable victories by land and sea stand forth prominently in its record: those of Crecy, Poitiers, the capture of Calais, the battle of Halidon Hill, of Neville's Cross, and the sea-fight of Sluys.

In the ambulatory of the Royal Exchange, London, is commemorated pictorially one event of his reign in which the city's Corporation took part: the entertainment of four kings - England, France, Scotland, and Cyprus - at the Lord Mayor's feast. The Order of the Garter was instituted by King Edward III.

He also built St. Stephen's Chapel (the restored crypt of which alone remains), for centuries the House of Commons. Not "wholly unworthy." he to be entitled "the greatest Royal leader of the 'whole' of English society, as well as the first hero-King of the 'whole' English nation." The magnificent castle of Windsor was built by him.