You are here: London Online > Kings and Queens > Stephen 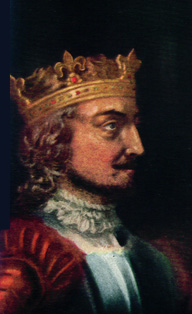 Of Blois, son of the Conqueror's daughter Adela, who married Stephen, a Count of Blois. Born 1105, and brought up at the English court. He claimed as nearest male heir, save his brother, of the Conqueror's blood-his cousin, the son of Robert, being dead. This, supported by his personal popularity; alike courteous and affable; of a bright and genial disposition, and kindly heart; brought the citizens to his side when he appeared at the gates of London to urge his doubtful claim to the throne. Crowned, December 26th, 1135.

"Undismayed by the absence of the hereditary counsellors of the Crown, London's Aldermen and wise-men gathered together at the folk-moot, and these providing at their own will for the good of the realm, unanimously resolved to choose a king." Stephen was their choice. They swore to defend him with money and arms. He, on his part, swore to do his best for the good government, defence, and tranquillity of the realm. For his oath's sake, and the kingdom's sake, there is little reason for doubt that he intended well at the outset, and hoped to prove himself successful; which he was not.

The nineteen years of King Stephen's reign "are years of a misrule and disorder unknown in our history" (John Richard Green). Stephen had counted without the barons of England, one of whom, Robert, Earl of Gloucester, half brother of Matilda, daughter of Henry I., raised the standard of revolt. The civil war resulting became "a mere chaos of pillage and bloodshed," the like of which England had never yet known. That war had its origin, be it added, in Henry I's daughter Matilda's (better known as the Empress Maude of Germany) claim to the English crown.

Anarchy within his realm notwithstanding, Stephen was not an unpopular king. The people at large had heavy complaints to urge against his neglect of their interests; as had the barons against his weakness and prodigality. But there was a general disposition among all classes, we are told, to like and to sympathise with him. lie lived to the age of fifty, and although twice made prisoner, and treated with some severity, died in his bed, and was buried at Feversham, the burial-place of his Queen, Matilda, who predeceased him.