You are here: London Online > Kings and Queens > Charles II 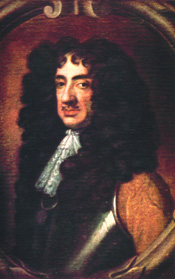 Charles, who, together with his brother James, Duke of York, had escaped from St. James's Palace (April 23rd, 1648), landed in Scotland (1650), and was crowned at Scone the year following. Crossed over into England, and was defeated at the battle of Worcester; went afterwards to Holland. Landed at Dover May 29th, 1660 and restored to the throne. Crowned at Westminster, April 13th, 1661, and the year following married Catherine, Infanta of Siain.

The Restoration marks the birth of "Modern England "-that England yet in the full of her fame, whose eventual destiny under the greater and more comprehensive name and title of the United Kingdom of Great Britain and Ireland, and the British Dominions beyond the seas; India, the Dominion of Canada, Australasia, United South Africa, and the lesser British Dependencies: whose eventual destiny as an Empire none could have forecast. Though the British Empire would later crumble, it was perhaps the wealthiest and most powerful Empire the world has ever known.

By far the ablest of the House of Stuart was Charles II.: "Of great quickness of conception, great pleasantness of wit, with great variety of knowledge, more observation, and truer judgment of men than one would have imagined... He desired nothing but that he might be easy himself and that everybody else should be so." Thus Sir William Temple, the well-known statesman of the Restoration period.

Everyone who has read Pepys knows all about Charles II., his court, his mistresses, children, dogs and ducks, dress, jokes, debts, theatre-going, horse-racing, gambling, and so on. His transactions with France and Holland are discussed in like manner by Pepys; the naval victories of the Dutch, and the money payments of the French king.

Nor are the "Regicides" forgotten, twenty-eight of whom were brought to trial, and thirteen executed, for their share in the trial and death of the late King, whose "Divine right" did not greatly trouble his son and successor. His object was to carry on the Government of England peacefully and pleasantly; to rest, in a word, being brought out of great tribulation, and be thankful.