You are here: London Online > Kings and Queens > Edward VII 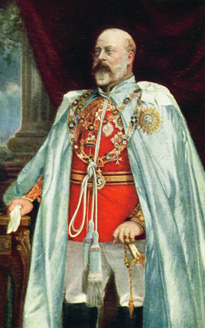 Of the political events of King Edward VII.'s reign, the most important were the successful termination of the South African War, and an increasing tendency on the part of the Colonies towards the consideration of Imperial Federation for defensive and trade purposes. A United South Africa, under the British Crown, was the final outcome of the Boer War.

In respect of Home affairs, perhaps the most noteworthy political movement was the agitation in behalf of Women's Suffrage. For the rest, King Edward's brief reign of nine years was peaceful, which happy condi-tion of things for the country he was actively helpful in promoting, so that he was often referred to as "the Peacemaker."

No English king has ever been so popular with every section of the community-high, low, rich, and poor-as Edward VII. It might with much truth he added that no reigning sovereign has been so popular in foreign countries, or, indeed, throughout the world.

No more tactful prince than he sat on the throne of England. The affection felt for him by his subjects was sincere and widespread, and embraced every class, so that it was said that no man dare say anything disparagingly of him, in the hearing of his fellows, in the worst haunts and slums of London.

One of the most genial and kind-hearted of men was King Edward; and withal an indefatigable worker; all things considered-affairs of state, meetings, travel, sport, reviews, banquets, functions, fetes, commemorations, all things considered, one of the hardest-worked men, whether as Prince of Wales or King, in his dominion.

In one way or another he appealed to the loyalty and attachment of every class; by his neutral attitude in respect of politics and creeds; by his unfailing courtesy and geniality; by the interest he showed in measures of charity; by the unaffected simplicity of his home-life.

No better word could be found to sum up the character of King Edward VII than the expressive word "gentleman." A truer English gentleman never lived.