You are here: London Online > Kings and Queens > Edward II 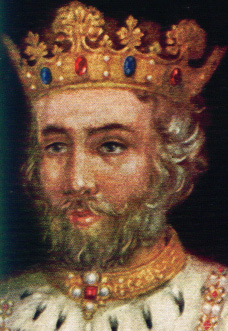 Eldest surviving son of Edward I. Born at Carnarvon (as aforesaid), 1284. The first King of England's son, we say, who bore the familiar and popular title of Prince of Wales.

He to whom his undoing is traced was Piers Gaveston, his intimate friend and companion during his father's reign, a Gascon gentleman who, loving pleasure not wisely but too well, taught the young prince many an undesirable lesson, and eventually led him that wrong road which so bitterly disappointed and wounded the King his father.

Banished from the English court for his share in the intrigues which had estranged the father's affection, Edward II., when he came to the throne, recalled Piers Gaveston, created him Earl of Cornwall, and placed him at the head of affairs. The baronage were furious. After a few months of power, Gaveston was again banished by demand of the Parliament. Once more recalled by the King, he was captured by the baronage and beheaded without trial.

"The six years that followed Gaveston's death are among the darkest in English history," owing to the continued and calamitous dissensions between the barons and the King; added to which there was "a terrible succession of famines." Famine and an "utter absence of all rule" intensified the national sufferings.

"A mere trifler who violates national rights, outrages national sentiments, and executes national champions, must not expect to inspire even the ordinary respect of hatred" (Sanford)

Edward II. was compelled to sign a declaration of his own wrong-doing and incompetence, whereupon he formally resigned the crown (January 13th, 1327). He was allowed to live for eight months "a private person, without any manner of royal dignity." At the end of that time he was brutally murdered in Berkeley Castle, and lies buried in Gloucester Cathedral. "Less regretted and less respected," this King Edward II., according to the chronicles, than any king of England. How can this be, since the severest sentence of History on record had been already apportioned to the iniquities of John? As the compiler of this history, we are necessarily debarred from quoting the saying imputed to Sir Robert Walpole.