You are here: London Online > Kings and Queens > John 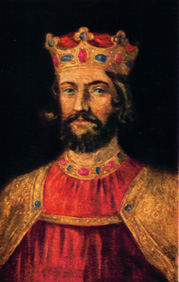 Sansterre or Lackland. Fifth son of Henry II.; born 1166. Crowned May 27th, 1199. "Without dispute the worst of the English kings," the actuating principle of whose life was selfish-ness, and that "in the narrowest and lowest sense of the term," descending to ignominious depths of baseness. Thus the verdict of History. It is an ill wind that blows none good, whether in the case of nations or individuals.

The Great Charter discussed, agreed to and signed at Runnymede in a single day (June 15th, 1215, one year before the king's death), might be said to represent the eradication politically, by armed barons, of that lowest and basest form of selfishness which proved the curse of England for nearly the whole of King John's reign. "Foul as it is, hell itself is defiled by the fouler presence of John." Thus the terrible verdict of contemporaries.

"Forasmuch," said the Archbishop at his crowning; "forasmuch, as we see him to be prudent and vigorous, we all, after invoking the Holy Spirit's grace, for his merits, no less than his royal blood, have with one consent chosen him for our king": ungrateful son, treacherous brother, mean and unworthy husband, suspected murderer of Arthur, son of his elder brother Geoffrey, cruel and vindictive, "an evil man without shame," who "seemed to find pleasure in the invectives with which he was loaded." The character of this prince is little else than a complication of vices.

"Not content with inflicting the most grievous injuries on the honour of the highest families in the land, he exulted in parading his infamy... It was this conduct, far more than any acts of feudal oppression, that enrolled against him that phalanx of Barons, to whose exertions, guided by the wiser and nobler counsels of the Primate Langton, we owe the Magna Charta of our Constitution." The lowest depth of his sovereign baseness was reached when he surrendered his crown to the Papal legate. John died at Newark, and lies buried in Worcester Cathedral.