You are here: London Online > Kings and Queens > George I 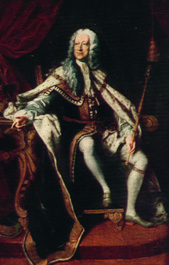 First sovereign of the House of Hanover. Son of the Elector of Hanover, by Sophia, daughter of Elizabeth, daughter of James I., in whose line the Act of Settlement (1701), passed on the death of the last surviving child of the Princess Anne (afterwards Queen), vested the Crown of the United Kingdom.

By that Act of Settlement it was enacted (among other matters) that every Sovereign of England must thereafter be in communion with the Church of England "as by law established."

It should be of interest to remind the reader that Queen Anne was the last English sovereign who presided in person at the Cabinet Councils of Ministers. With the accession of King George I. began that practice now existing, of those councils being reserved to the private meeting of members of the Ministry in power. In brief, the kingdom now began to be governed, not by the King, but by the Ministers of the Crown.

"It was lucky for us that our first Georges were not more high-minded men; especially fortunate that they loved Hanover so much as to leave England to have her own way. Our chief troubles began when we got a king who gloried in the name of Briton, and being born in the country proposed to rule it."

- Thus wrote that great weekday preacher, Thackeray, who had the rare gift of making history very delightful reading, and of writing sermons which thousands never discovered were sermons, even after they had paid one shilling monthly for the privilege of reading them. He had the happiest knack of disguising his sermons. But this by the way.

George I., as Charles II., liked to be left alone. So long as Ministers did not trouble him, he did not trouble Ministers; a state of things which admirably suited the plans of Sir Robert Walpole, chief of the Whigs, and along with him the country generally.

With the exception of a Jacobite rising in 1715, soon quelled, and the well-known "South Sea Bubble," which brought ruin to innumerable homes, George I's reign was generally pacific and restful. The duration of Parliament to seven years dates from his time.

He died at Osnaburgh, on a journey to his beloved Hanover, in 1727, having ruled his new kingdom peacefully for thirteen years.