You are here: London Online > Kings and Queens > Henry VI 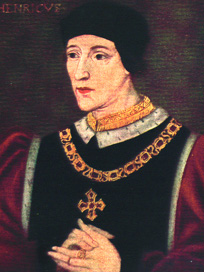 A simple man of noble thoughts, he was three times made prisoner, twice deposed, and finally murdered in the Tower.

Henry was the only son of Henry V. Born 1421. He ascended the throne 1422 and was proclaimed King of France the same year. Crowned at Westminster King of England, November 6th 1429, a child in his eighth year, who during his minority was under the guardianship of Richard Beauchamp, Earl of Warwick. One of the most unfortunate of the sovereigns of the House of Lancaster, whose reign was a continued succession of misgovernment, violence, and anarchy; partly the results of an "intellectual weakness," supposed to have been attributable to an inherited infirmity (epilepsy) traceable to his grandfathers on both sides.

It has been said of Henry VI. that he was better fitted for a cloister than a crown; to have been a monk rather than the rular of a kingdom. In that event, the name of Henry of Windsor might have been enrolled in the calendar of saints, as one who had aimed at the religious regeneration of that part of the world in which his life was spent.

The siege of Orleans (1428-9), recalling "God's holy maid," Jeanne D'Arc, and her martyrdom at Rouen, were of his reign, toward the close of which, of all the possessions in France which this king's predecessors had held, Calais alone remained.

The ruinous issue of the great struggle with France roused England to a burst of fury against the Government, to whose weakness it attributed its disasters. Jack Cade's insurrection was one of the immediate results. The Wars of the Roses were to follow; Henry having sunk into a state of idiocy, which made his rule, even feeble as it was, no longer possible.

The rival House of York appeared in the field, and the cause of the House of Lancaster was lost at the battle of Towton, near Tadcaster, in Yorkshire (1461). With the Yorkist victory there gained, the crown passed to Edward, Duke of York, who boasted of a double descent from Edward III. Betrayed into the hands of his enemies, Henry VI. was finally deposed (1461), and passed to his death (1471) in the Tower of London. He was laid to rest at Chertsey, where later Henry VII caused his remains to be removed to St. George's Chapel at Windsor.