You are here: London Online > Kings and Queens > Henry I 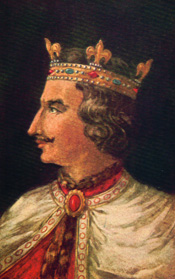 Beauclerc, or the Scholar, brother of William Rufus; born 1068; crowned August 5th, 1100; married (1) Matilda, daughter of Malcolm, King of Scots; (2) Adelais of Louvain; made peace with his elder brother, Robert, Duke of Normandy, 1101; invaded Normandy four years later, defeated his brother, took him prisoner, and sent him to England.

Betrothed his daughter Matilda to the Emperor Henry V. of Germany, 1109; challenged by the French King Louis VI., 1117, over whom he was victorious; and was in peaceful possession of Normandy, 1129. Such are the leading historical facts of Henry's reign.

He had the misfortune to lose his eldest son, William "the Atheling," and two others of his children, together with 180 of his nobility, by the wreck of "the White Ship," in crossing the Channel from Normandy.

He was spoken of, after his death, by many of his English subjects as "the great King Henry," revered by some for three good gifts: sagacity, success, and wealth; by others held of ill fame for three gross vices: avarice, wantonness, and cruelty.

"By a decisive English victory on Norman soil, he avenged the shame of Hastings." The conquered duchy became a dependency of the English crown. For a quarter of a century Henry I. was more or less occupied in crushing the revolts and meeting the unceasing hostilities of the French. "In England, however, all was peace." "God give him the peace he loved," wrote the Archbishop of Rouen from King Henry's death-bed. His body was brought over to England and buried in the Abbey of St. Mary, which he had founded at Reading.

When to some extent relieved from the restless anxieties begotten of Normandy, he set himself energetically to work at home, to realise the promises which he had held forth in charters not a few in the early part of his reign. "Every part of the kingdom, and every branch of the government, local as well as imperial, felt the firm touch of Henry's well-directed hand."