You are here: London Online > Kings and Queens > George V 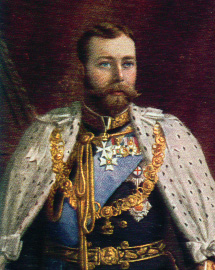 Second son of King Edward VII. Born June 3rd, 1865. Married 1893 the Princess Victoria Mary of Teck, only daughter of the Princess Mary Adelaide of Cambridge, by her marriage with Francis, Duke of Teck, 1866.

Succeeded to the throne May 7th, 1910. Held his first council at St. James's Palace the following day; proclaimed King in London and elsewhere throughout the Empire, May 9th. The date of Coronation at Westminster appointed by proclamation was June 22nd, 1911.

George V early entered the Royal Navy, which distinguished service he adopted as a profession, in like manner as his royal ancestor, King William IV., and his uncle, Alfred, Duke of Edinburgh, being an Admiral on the active list at the date of his Accession.

It was truly said of his father, when he became king, that he entered upon a great heritage of loyalty to the throne, established by Queen Victoria's long and beneficent reign. That heritage was largely increased by the briefer but scarcely less gracious and prosperous reign of Edward VII., who succeeded in winning the affection of his subjects of every class in a remarkable measure-a measure rarely equalled in the case of any sovereign of the United Kingdom, and surely never excelled.

King George V. was already assured that he could count with certainty on the transference of that loyalty to himself. He had the advantage of no inconsiderable training in two of the best schools-example and experience; of example in what way he may best hope to win a people's devotion and affection so that they shall endure; of experience, in that he had the well-established precedents of two former reigns to guide him, alike in the duties of a constitutional sovereign, and in that conception of royalty which those two reigns made most familiar to his subjects.

King George was endowed with many of the attractive qualities of his father and mother. He was of warm and generous sympathies, a kind heart, and takes a keen interest in any efforts tending to the amelioration of the condition of the poorer classes of his people.

He partook of the punctuality and aptitude for work of the late king, and of his virtues of business method in dealing with it.